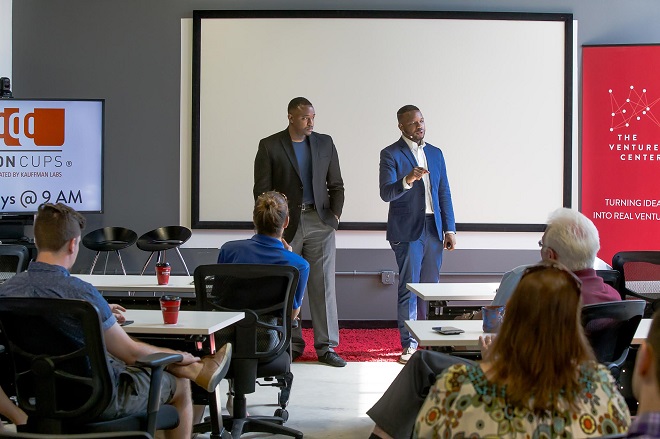 Wyzerr, the result of a pivot by former IA client and ARK Challenge startup Sooligan, pitched this week at 1 Million Cups from the Venture Center in Little Rock, and its founders believe it has both the timing and the solution to make it big.

Wyzerr's consumer insights platform is designed to make it much easier for consumers to provide valuable customer feedback to the businesses they patronize.

Wyzerr's unique, color-coded, "gamified" approach to customer surveys distinguishes it from the competition.

Really, it's very cool and a definite upgrade to the experience. Check it out here.

And here's coverage of Wyzerr's morning at 1MC from Arkansas Business. Wyzerr's Steadmon Harper (above left) and Bjorn Simmons presented at 1MC.

Some background: Sooligan,  a social media app that enabled users to find and share information about any city, participated in the inaugural ARK run in 2012 and last year, co-founder Natasia Malaihollo took it to StartFast in Syracuse. By then, Pine Bluff native Harper was on the team. It was in Syracuse that Sooligan was advised to pivot. The idea for Wyzerr was hatched after the team hooked up with another Razorback, Simmons, who hails from North Little Rock.

For now, Wyzerr is based in Cincy for the next four months as part of a prestigious accelerator program that launches Monday. (Simmons said he couldn't reveal the name, but you can, of course, google Cincinnati accelerator and come up with this.)

One day, Wyzerr could have a local presence, an "interface studio" where businesses can test new products and services and consumers can review them. Because of its strong Arkansas connections, Little Rock is where the team envisions such a studio.

The paths of Simmons and Harper took them out of state post-graduation from the UA, and the tech startup ecosystem they've discovered in Little Rock has been a pleasant surprise.

"Arkansas is investing in tech startups and innovation. And that's not only attracting new people but attracting people like us back here," Simmons told Arkansas Business.

Malaihollo remained connected to Arkansas once Sooligan completed the ARK and became an advocate for the state. She's excited to see all the growth in central Arkansas and believes Little Rock is catching up to NWA in terms of startup activity.

"It’s exciting to watch an entire ecosystem shift and change," she told INOV8.

Malaihollo wasn't able to make it to town for 1MC because she was setting up for the accelerator start next week in Cincy, but she's been talking with Jeannette Balleza-Collins about coming back to mentor for the ARK in NWA.

"I will be forever in debt to the NWA region for all the community did to jumpstart my entrepreneurial career," she said, adding that she'll do "anything I can do to help the next wave of entrepreneurs in NWA and beyond."

As for Wyzerr, Nat sees growth ahead and believes her Sooligan experience will prove an invaluable tool. She sees Wyzerr as a "startup unicorn," first in its space to offer an innovative solution to a real problem. And she thinks the timing is just right.

"I think all of my experiences, especially with Sooligan, were setting me up to build Wyzerr," she said. "I often utilize a lot of knowledge and skills I developed or acquired building Sooligan. I guess it’s all coming full circle. I’m excited about being here in Cincinnati and believe they’ll be able to help us grow in the right direction."