Menguin Planned a Temporary Relocation to Arkansas, But Made It Permanent

When Menguin started looking for growth opportunities, it just made sense to look in Arkansas for talent and investment. With brands like Walmart and Acumen Brands born here, Arkansas is known to have a particular expertise in supporting and growing retail companies. Though CEO Justin Delaney thought the move would be a temporary one, once he got here, met the people and experienced the support they offered, he decided to make northwest Arkansas the permanent home for Menguin.

Menguin is an online tuxedo rental company that was originally based out of Atlanta, Georgia. But according to Delaney, the startup community was not strong in Atlanta and he wasn’t getting the support that he needed to take his business to the next level. When an investor suggested he relocate Menguin to northwest Arkansas, Delaney didn’t have to think long about making the move. He moved his team of five to Fayetteville in May 2015. 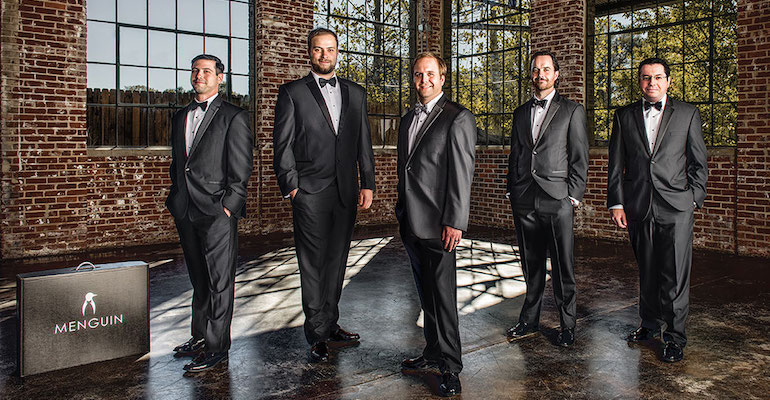 Since moving to Arkansas, Menguin has been an Innovate Arkansas (IA) client and credits IA with helping the company grow. The first order of business was to find investors to raise a significant round, and IA took the lead in introducing Menguin to the right potential investors. The "right" investors were those with retail experience and knowledge they could share to help Menguin grow beyond those initial investment needs.

Through IA partnerships, Menguin was next introduced to Metova, an Arkansas-based software development company that is working with major Super Bowl-participating brands. Delaney loves this: “I am now talking with people that are doing Super Bowl-level commercials because of Innovate Arkansas!” As Menguin gets ready to increase its marketing efforts, partners with this kind of experience are more important than ever.

Less than a year after moving to Arkansas, Menguin has grown to a staff of 13 and increased monthly revenue from $10,000 to $200,000. Delaney has now become one of Arkansas’s strongest supporters, often talking to other startups considering making the move into the state. According to Delaney, “There are world class people and investors here. There is no reason for there not to be world class companies, too.”